Notepad++ supports writing plugins with .net (core),
and it is possible to write plugins with Clojure-CLR and lsp.
Notepad++ is easier to use than Emacs,
and Clojure-clr is more powerful than elisp.

I think it’s good to make Notepad++ (ClojureCLR) the official editor of Clojure, just like DrRacket.

It is also very good to transplant DrRacket into DrClojure with clojure, and then compile it with graalvm.

.Net package to install into visual studio to make plugins for Notepad++

Notepad++ 7.5.6 patch for Clojure by modifying config files of Lisp. 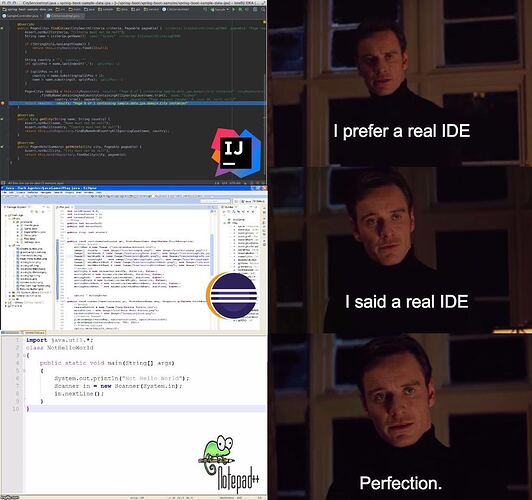 I’m a huge fan of Notepad++, but as far as I know, it’s always been windows only no?

If the headline is a question, the answer is always no…

What are the alternatives to Notepad++ on Ubuntu?

Notepad++ (notepad-plus-plus) is a snap package in the default repositories of all currently supported versions of Ubuntu. To install Notepad++ open the terminal and type:

sudo snap install notepad-plus-plus
To add Notepad++ navigation to other drives besides the default drive:

It is actually possible to install Notepad++ on Ubuntu. Just run the following commands:

Then, download the Notepad++ Windows installer, right click it, and select Open With -> Wine Windows Program Loader. Follow the typical installation process and you should be able to open Notepad++ from your Dash.

I did a little work, as long as I have time to improve it.

In the community, it seems that only I write Clojure with notepad++.

But what about LightTable?

The basic editing features and performance of LightTable are too poor,
NPM and js are too bad.

I think the platform limitation is hard to solve. Wine has so many issues, it’s unstable, bad performance, no hidpi support, bad compatibale and require a large resources. So a well cross-platform editor will be better choice generally, IMO.

Notepadqq is a Notepad++ like editor for the Linux desktop.
https://notepadqq.com/wp/