I am trying to build an android app with shadow-cljs and react-native but I can’t seem to figure out how every piece fits together. Every time I run npx react-native start to run the app on my phone or on emulator, I get an error telling me that some modules don’t exist: 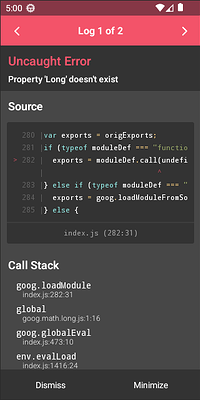 In shadow-cljs.edn, I have a build :app defined as such

Building it with npx shadow-cljs watch app creates the file ./react-native/app/index.js, that I include in the index file at the root of the app (import './app/index.js';).

I tried to adapt what I’ve seen in different example repositories, but I always get this kind of error, am I missing something ?

The error looks like you are using the Hermes JS engine. It does not support ES6+ features such as const.

Try setting :compiler-options {:output-feature-set :es5} in your build config, so the shadow-cljs code is transpiled down to not use these features.

Note that in your build config the :compiler-options {:preloads [devtools.core]} has no effect and you can remove it. You can move the :preloads to :devtools instead if you want them but I don’t think they work with react-native anyways.

Otherwise should be fine.

Spot on ! Thank you so much