Does clojure(script) have its own framework for functional event streams?

You might enjoy core.async’s channels (GitHub - clojure/core.async: Facilities for async programming and communication in Clojure), which can be composed with core Clojure transducers for map, filter, and so forth.

If you are searching for a framework help you development application frontend, I think re-frame is a good option. You don’t operate on event stream directly, instead you register functions as event handler and subscription handler.

missionary is an attempt to bridge the gap between functional effect/stream systems and reactive programming. It is reminiscent of RX but designed specifically for clojure(script) with a more expressive syntax, and improves the functional discrete streaming model with support for continuous time from the ground up and glitch-free propagation of events through dynamic DAGs. 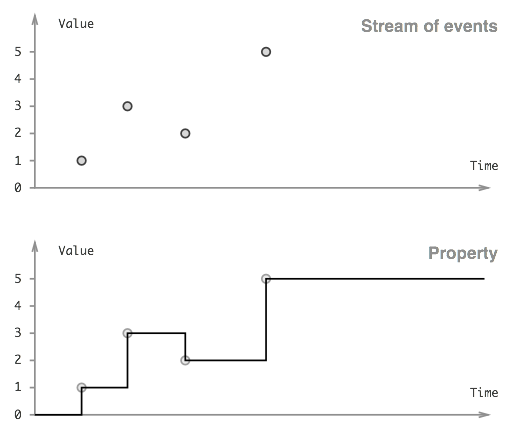 Kefir.js calls the two types “streams” (discrete) and “properties” (continuous). I believe Kefir is closer to missionary (continuous signals notify when a dependency has changed and thus the signal is ready to be sampled).

I should mention that at hyperfiddle we are working on a reactive dialect of clojure that compiles clojure syntax to missionary signals through a custom clojure analyzer. First teased on twitter two weeks ago. It can express incremental view maintenance of the dom (reactjs-equivalent but emits fine grained effects, no vdom). Since it’s reactive and natively async, it can also hop network, so streaming client/server datasync between incremental backend and incremental frontend falls out for free.

Is missionary compatible with clojurescript? It contains java code.

It has implementations for both clj and cljs, the feature set is identical minus thread interop. The JVM part is implemented in java because it’s a better fit than clojure for low-level code.