Favorite monitors for development on MacOS?

Let’s talk monitors. Is that ok at the watercooler, @plexus? Or should all posts here be Clojure specific?

I have a love/hate-relationship with monitors. I used to love coding on only a laptop (Retina) screen, because you can only focus on so much at the same time. But when developing web applications, it’s not sufficient, because you want to have the console open and view the page like other people do on bigger monitors. Now I usually only use one monitor + my laptop screen.

I’ve had issues with a 25" 2560x1440 Dell monitor: the fonts were too small for me to read and MacOS did not support font scaling like in Windows. I sold it.

Now I’m using a 24" FullHD Dell (1920x1200) monitor. It’s ok, but recently I read about eye strain and pulse width modulation which is used in older monitors to dim the screen. It’s likely that my monitor uses it. Maybe it’s better to look for alternatives.

What are your favorite monitors to do Clojure coding on MacOS? Do you use a 4K monitor? Is it really an improvement over FullHD for day to day coding?

Is that ok at the watercooler, @plexus? Or should all posts here be Clojure specific?

All good. Watercooler just means “daily chit chat”, like the banter you’d have with colleagues standing around the water cooler.

And really you don’t need my permission to post here

if something fits better in a different category one of the staff members will probably just move it.

With the qualifier that I use Linux, and that so far it has been mostly dealing with c code and not clojure, I’ve liked both my 1440p Asus monitor and even more my Asus 4k monitor. My day involves a lot of backporting commits for the Linux kernel or reviewing the work of others that have, and having all the screen real estate to look at code or patches side by side is very nice.

I have two Dell P2715Q monitors (4K 27"). They are pretty good, I have no real complaints about them. I run them at native 4K, macOS lets you run them at a scaled 5K equivalent, but things looks slightly fuzzy. If I had the money I’d prefer two 5K monitors, but not at the current prices. Maybe in a few years.

Do you use the 27" monitors at HiDPI?

Haven’t tried it with MacOs but the “Samsung CF791 Series 34-Inch Curved Widescreen Monitor” is wonderful for development.

I use 14" ThinkPad with 2560x1440 resolution (210ppi) and 32" 4k Dell UP3216 (140ppi) without scaling, I think the difference doesn’t matter because I don’t use them at the same time, and because the viewing distance of laptop display and monitor is different. I do occasionally need to zoom websites (120% or something) but I’m okay with that. And I can zoom the terminal similarly, usually if doing pair coding or showing something to someone (I don’t normally run other apps than browser or terminal.)

After several other setups, I find this one to be fantastic. Some random comments:

My only problem with this setup is that the built-in Intel Iris graphics is a bit too slow to drive this screen. Not a problem with Emacs, but noticeable when moving large windows, or using 3D CAD software.

Things I would like to change in the future:

I know I do not want a larger monitor. I found that anything larger than 27" is actually too big, you have to move your head around and you always have something outside of your direct field of vision. Not that useful for coding. I also tried curved monitors and found them annoying. I think this setup is a fairly nice local extremum.

I know I do not want a larger monitor. I found that anything larger than 27" is actually too big, you have to move your head around and you always have something outside of your direct field of vision.

Exactly this. For me bigger than 24" gives this problem. I might look into the P2415Q.

Hmm, I’m not sure what you mean by that. I run it at its native resolution, which is not-nearly-retina, and my Mac scales the image.

This is what my display settings show: 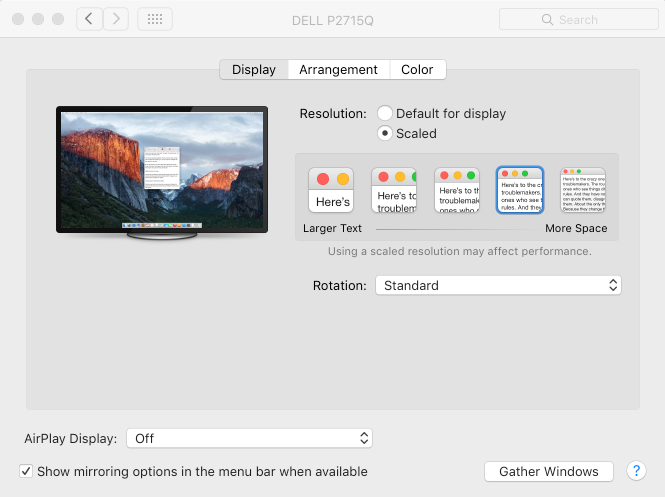 Overall, I’d say this setup has fantastic price-performance ratio. The P2715Q is cheap and you can get away with the lower DPI if you mostly use it for programming.

I use this, I really like it, because of the usb-c I only need one cable (even if you don’t have a mac with usb-c now, eventually you probably will), and using the macbook screen with the monitor above it. No issues with scaling.