Making a ClojureScript REPL work in a deps.edn project with Cursive

I haven’t been able to set this up. The official Cursive guide doesn’t talk about ClojureScript much.

So far, I have used the following command adapted from the official ClojureScript tutorial:

The REPL launched thus gives access to stuff like Google Closure lib, but lacks the more interactive nature of REPL provided by Cursive.

The command used in cursive to launch REPL is similar to:

My thinking here is what I want might work if I can somehow instruct car safe to use cljs.main instead of clojure.main.

Is there an easy way to configure a deps.edn project in Cursive to launch a cljs REPL? In case cursive is difficult to work with w.r.t. cljs, can you suggest me a non-Emacs alternative?

There’s really nothing special to do. When you create the REPL configuration choose the clojure.main option. Then in the Parameters: field of that configuration add your ClojureScript REPL parameters.

That didn’t work. As an example, I still couldn’t import goog.Uri. I think a screenshot will better explain my current configuration. 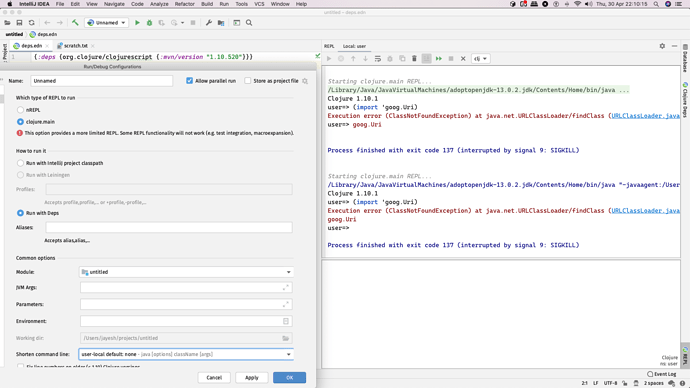 My understanding is that I don’t need to fill anything in the Parameters if I want to launch a barebones cljs REPL.

Please forgive me if I’m missing anything obvious. I’m quite new to this.

Never mind! I was reading the commands wrong.

To invoke the REPL with cljs, I am supposed to specify cljs.main as the entry point.

So I added --main cljs.main to the Parameters option. It worked! 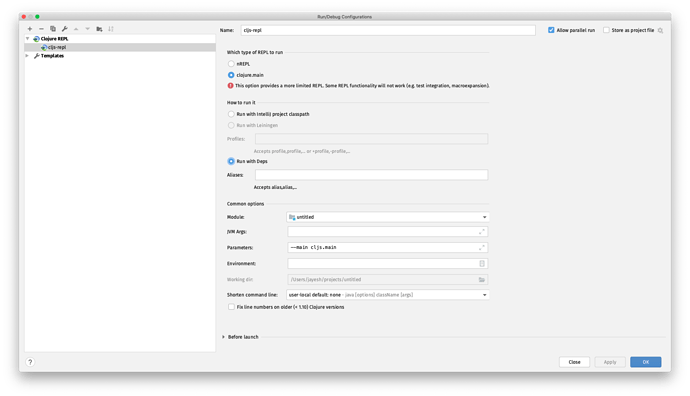 Thank you for the pointer!

This is how I’ve started ClojureScript REPLs in Cursive for the past 2 years.

Glad you got it working!