Would you like to take a look at my opinion on parentheses?

Thanks for sharing that – an interesting approach. It seems as if Rich Hickey was suggesting that Lisp’s syntax didn’t need fixing; that it becomes a benefit after time. But I certainly see the appeal of a DOM-based editor for complex nested data structures, and I like your implementation of it.

My editor does not render macros. So I still write some of my code in plain text, which suggested Lisp-syntax is powerful too. I think my editor makes a small set of Lisp syntax really shiny.

My first experience with lisp pre paredit was a nightmare. It was at least partially why I was against the nested parenthesis at the start. 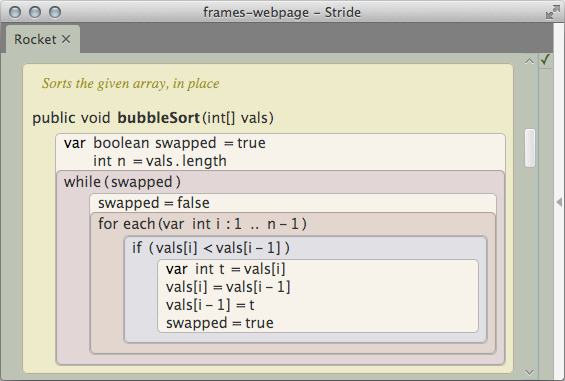 FWIW I’m on the “avoid” side of this, for myself (a long-time lisper) and for my students (who are often new programmers).

While I think it’s swell for others to use paredit or parinfer if they like them, some of the reasons that I don’t want them in my teaching or development editing environments are:

Again, I can see why people like paredit and parinfer, which I definitely agree are clever, and if people find them helpful then I think it’s great for them to use them. But I think there are good reasons to avoid them too, and I hope that tool developers will keep these in mind, providing ways to avoid them in their editors while nonetheless supporting auto-reindentation and bracket matching.

If I were going to start over today with what exists now, I’d go with Parinfer. It is really nice that you don’t have to learn a whole bunch of commands. I’ve used Parinfer in a Clojure workshop and it was great. The experienced programmers grumbled a bit as they got used to it, but it worked super well for beginners. I noticed two things:

I use Paredit and I’m comfortable with it, but it took a lot of time on my part and a lot of evolution on the part of the implementors to iron out some wrinkles. For instance, now Paredit will detect if you’re unbalanced and let you type in closing parens. It didn’t do that when I started. It would not let you do anything! You had to know how to bypass it.

Parinfer is on more solid foundation, with separate indentation and braces modes.