Recommendations for the papers that inspired Clojure?

I just watched Fertile Ground, the Roots of Clojure by Michael Fogus from the first conj at 2010, which I found really exciting. Transcribed to the best of my ability from the final minutes of his talk:

Okay, so Homer describes a scenario where chariot races are occuring. And the chariot technology he describes is actually more advanced than the chariots in his own culture. This is exactly how I feel every time I read a paper or a book from the 70s or the 80s. And it’s just an amazing thing! There’s so much information back there that Clojure is built upon – you could spend a lifetime reading about it, but never exhaust the wealth.

But thankfully for us, Rich has read all of those! And he’s put them together in Clojure. And he’s made a beautiful language. And I think that one day, when we get to the point where we’ve been there a few years and some other sap is going to be at a conference and he’s going to throw up his agenda, which is going to look something like this: 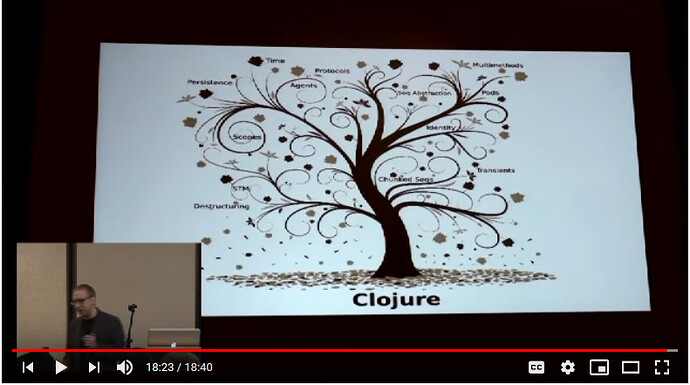 That’s all I have.

His reference to all the interesting stuff of the 80s and 90s got me curious. So I figured I’d ask here!

Which computer science papers from the 80s or 90s or later do you consider recommended reading?

The full video can be watched on YouTube (quote starting at 17:10):

Equal Rights for Functional Objects or, The More Things Change, The More They Are the Same (1993)

In that talk (Are we there yet?) he mention in the end the paper: Time, Clocks, and the Ordering of Events in a Distributed System.

This transcription of Clojure - An Introduction for Lisp Programmers has extracted references to some of the papers mentioned in there:

This recent exploration into the ideas behind spec and is full of interesting links to papers around RDF.

The poster has even unearthed some references to papers in spec.alpha code