Slack is hugely popular within the Clojure community: Clojurians-Slack has ~15k subscribers and there’s a lot of activity in large channels like #clojure, #clojurescript and #beginners (ie ~2k-2,5k messages/month). People with varying expertise meet, exchange ideas and help eachother (newcomers!) out. Slack is a great platform for the community.

When looking at the (huge) list of channels we can also see that a lof of local (meetup) groups of the Clojure community decided to have a channel on Slack. There are about 65 of those channels (named clojure-<country|city>).
With Slack being ubiquitous, and even newcomers know their way to Clojurians-Slack, one would expect these channels to be vibrant as well, right? Promoting the upcoming meetup, deciding on topics to discuss, talking about the last presentations etc.

Let’s look at some numbers.

Apparently, there was a huge demand for chat-like conversations in these smaller communities.

Fast-forward 3,5 years. How are the conversations going?

Let’s take a look at the largest channel: clojure-russia, 555 subscribers, started when Slack was introduced (May 2015).
Below the number of messages/month from summer 2015 till Oct 2018: 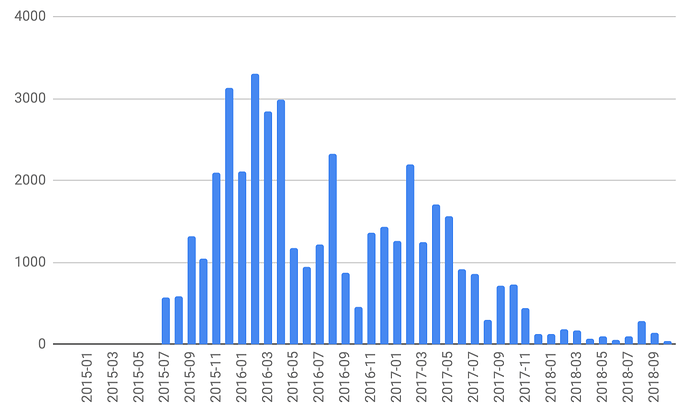 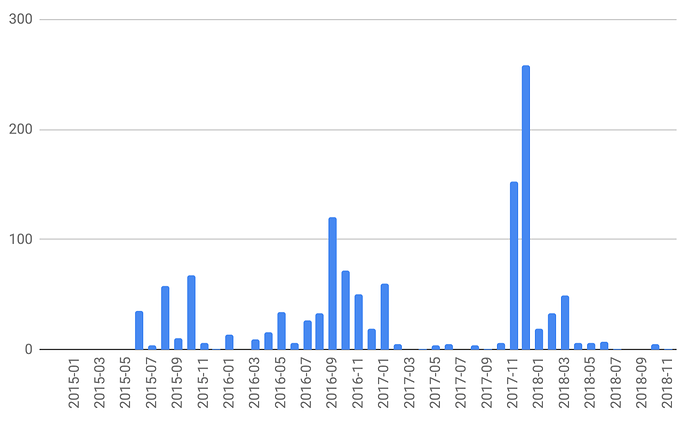 Seemed to have had their heydays in Q3 2016. These days: nothing. 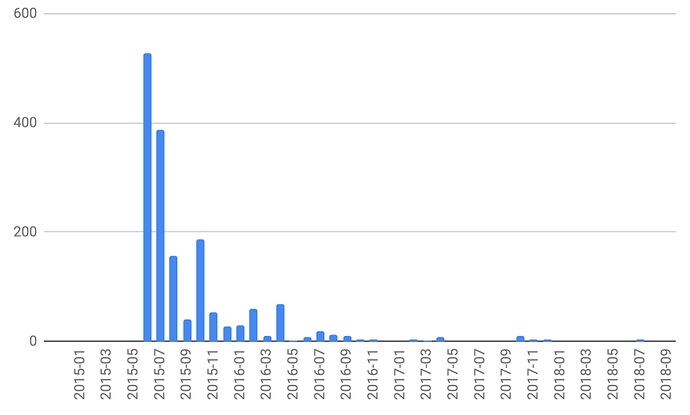 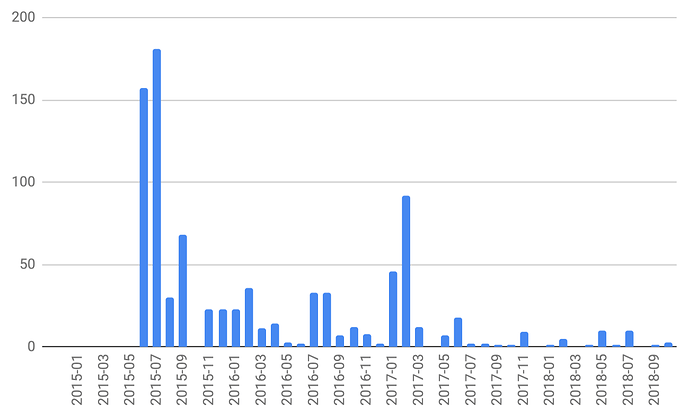 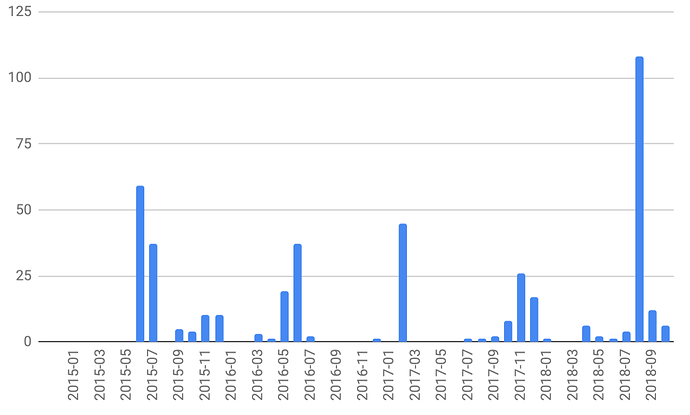 Not sure about Clojure in Japan, but as for Germany, it does not seem to represent the vibe I got when visiting ClojureD and Clojure-meetups in Berlin.

So most subcommunities got off Clojurians-Slack. Did Slack become less popular?, or Clojure as language? I think quite the opposite (for both).

What I think is at play is the type of conversation you want to have - and that the numbers show how suited Clojurians-Slack is for some converstions, and not for others.

If you look at a channel like #clojure or #beginners then you see there’s mostly a technical question-answer flow: What to use? How to do X? Why Y? Code snippets flying.
The conversation is mostly synchronous: a question being unanswered in the course of an hour is most likely never to be answered; no problem, just try again later. Given the unstructured form of discussion (and high volume) catching up is hard. The limited history (~6 days) is not perse a problem: sure, searching is not possible, and hence, similar questions are asked all the time, but everyone knows the deal. 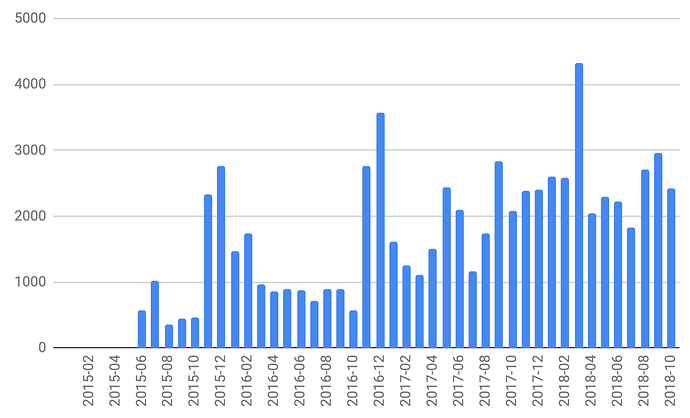 Compare this to typical conversations in meetup-channels: people chit-chatting with people they know from meetups, talk about interesting topics, who will be presenting the next meetup etc. People here are interested in Clojure (language or concepts) but not necessarily using it professionally.

A typical subscriber checks in with the community less often (a meeting is once a month) and catching up with the conversations is important for these users. Given the limited history and unstructured format of chats on Clojurians-Slack it’s partly impossible to see what I missed, nor is it convenient to catch up.
Especially to get the community going you want as much (structured/skimmable) history as possible. Seeing an empty channel instead is the ‘empty restaurant’ equivalent for online communities.
Conclusion: this user needs a more asynchronous way of conversation. Having limited options to hook into conversations (even if that’s 2 weeks ago) makes ‘making conversation’ (for individuals) and building social fabric (as a group) really hard.

As compiling the data for the local groups was easy due to the naming convention. But I can imagine the asynchronous nature of conversations is also preferred by authors and users of small opensource projects.
Pointing users somewhere where answers can be found that you or others gave earlier is a huge plus - as you’re probably not yet having a channel filled with users that can help out. Again, asynchronous is key.

This is a bit of digital archeology and speculation but I can think of a reason why Clojurians-Slack did once work for low-traffic channels: messages stayed up longer.
As Clojure/Script became more popular, so did the amount of “question-answer” messages. As a result the “sliding-window” of visible messages shrunk. So while messages today are only shown for 6 days, it’s been probably significant more than that.

Smaller communities within the Clojure community that once had an online presence on Clojurians-Slack, have moved off the platform. Clojurians-Slack is not the problem: it’s more lively than ever - but for question/answer type of conversations.
As a lot of later-to-be-Clojure-devs start in a local community I think it’s a loss for the greater community to no longer have these communities ‘near’ and offer them a place to talk Clojure.

I’m curious about the thoughts from the community here.

Also: stay tuned for my next post. Because we started something new…

There’s definitely an issue of “critical mass” in Slack channels. As an ex-pat Brit, I hang out in #clojure-uk and several folks there start their day, every day, with a barrage of “mornin’!” greetings and often some banter about the day’s news or projects that they’re working on. There are enough active folks for this to have become a persistent “feature” of the channel. For a “small island”, the subscriber count on Slack is high – but that also reflects the level of Clojure activity in the UK as being higher/more concentrated than a lot of other country/city channels.

In the past, I’ve tried to rally people around Gitter channels for open source projects but I’ve never managed to get better traction than on Slack, even with the nice, built-in integration Gitter has with GitHub.

It’ll be interesting to see if Zulip can gain traction in either of those areas. I am not a fan of the UI (and especially not the topics/streams aspect of it) but that sort of thing is pretty subjective.

If you want to set up bridges between those location and/or project channels on Slack and their equivalents on Zulip, I suspect the Admin team would be happy to help (when the first Zulip webhook integration was raised, the response seemed positive) – within the integration limits available for the free Slack plan, that is.

I hang out in #clojure-uk and several folks there start their day, every day, with a barrage of “mornin’!” greetings and often some banter about the day’s news or projects that they’re working on.

Thanks for bringing this up - because yes, as the stats show, there are some channels that keep the conversation going exactly using this tactic. In clojure-nl there’s a bot for this.
Still requires (and targets) a specific demographic of mostly people that work with Clojure I think.

If you want to set up bridges between those location and/or project channels on Slack and their equivalents on Zulip, I suspect the Admin team would be happy to help