What would be good/idiomatic way of naming functions that either fail or return nothing?

Example:- I am using a library [called failjure. For some reason I am not allowed to link that library here] for representing failed computations. So coming up with functions that return nothing of significance or return a failure is a common scenario.

How should I go about naming the function here?

First of all: I think you should use when rather than if since you’re not doing any branching.

Secondly, I’m guessing (f/fail "The states cannot be equal") returns a truthy value? Then you should probably call your predicate transition-blocked?, transition-impossible? or cannot-transition? instead.

Would adding a spec to your problem solve your need?

Failjure is based on monadic error handling, which comes from Haskell. In Haskell, type signatures are used for this. And when reading Haskell code, I allways get this information from the type signatures. Elm is another example.

Edit: here’s a way to do it, there might be better ways. I also realized that I might want to prefix failing functions with try-, so that’s what you were really asking for!

I like the idea of a naming convention. I have seen use of monadic failure techniques with clojure fail because of confusion over which functions are monadic and which are not.

Scott Wlaschin’s amazing series of posts and talks on the subject use a railway analogy. In a blog post extending the same idea to Clojure they use the naming convention of adding equals signs to the beginning and end of the function to show it is monadic [or monoidal? One of the two

In your example the function could be called:

That said I am slightly bothered by the example you gave as it has no return value. Normally such a function would either return a success case or a failure case so the functions can be chained without further manipulation.

Just realised that you were explicitly asking about functions that fail or return nothing! Using the railway analogy again how about naming it:

The extra bar character ("|") would denote that this is an “end of the line” function. This is similar to Scott’s analogy of converting a “dead end function” - called UpdateDb in his example to a two track function that can be chained/composed. The image is taken from slide of 115 from the talk linked in Scott’s ROP page. 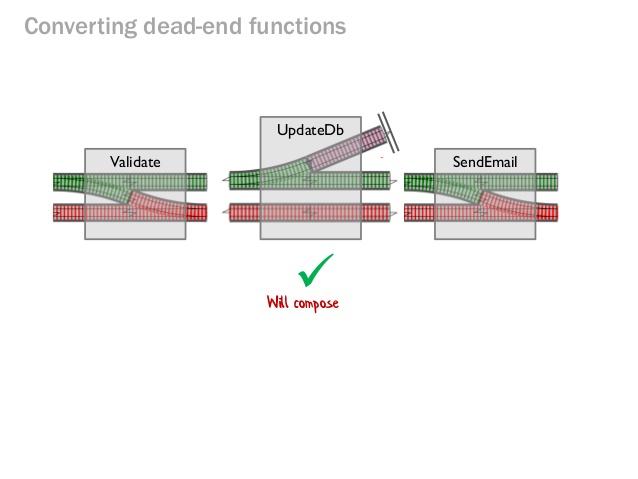 There may be better choices of characters out there to use e.g. “¬” ??

What would the equals signs mean then? "Two tracks in, two tracks out?

What would the equals signs mean then? "Two tracks in, two tracks out?

Yes two tracks in and two tracks out, success and fail, these are the only really chainable ones, but the other types are worth identifying so they can be converted consistently I guess.

Oooh - plus equals might be a good one for this: “±” . Not sure if Clojure supports such Unicode characters though … https://en.wikipedia.org/wiki/Plus-minus_sign

Makes sense. I think I would use this

Personally have a rule(not mature yet) on this:

You said a function either fail or return nothing, I think that is pretty common in Clojure(when you write web service) or in ClojureScript. e.g.

The result is when I wrote function for these kind of jobs, I won’t allow it fail, and this is easy to achieve and easy to test.

=> you could name your function guard-transition.