Which libraries are in need of accessible API docs?

I was looking at Enlive (see also Best library for querying HTML?), which I’ve used in the past and actually quite like, but then realized that I couldn’t find any up-to-date API docs anywhere. Certainly not linked from the project. There’s even a 4 year old issue about the lack of docs, with no resolution.

Apparently clojuredocs.org used to host API docs for libraries, but now it seems to only do core.

The thing is though, if you have your library on Github then it’s extremely easy to just host API docs youreslf, using codox and this script:

Copy the script to the root of your project, and in your project.clj configure Codox (for boot just update the DOC_CMD in the script).

That’s it. Now when you run ./generate_docs it will run codox, create a new commit on the gh-pages branch, and push it to Github. The script is designed to be super robust. It uses lower level Git operations so it doesn’t have to mess with your current branch, switch branches, or change the working tree. It really should just work. Your docs will be available at https://<username>.github.io/<projectname>. Don’t forget to link to them from your README.

You can add extra Markdown files which become part of the generated site, which is really great feature for adding e.g. a getting started guide or more reference material, and there are several themes available to adjust the look of Codox to your taste.

Here are some examples

I created a PR to add this to Enlive, I hope Christophe accepts it.

Now my question is: which other projects could really benefit from this? Who else should I send a PR to?

A few that come to mind (disclaimer: some are my own

I opened issues for tick and s3-deploy, and created a PR for derivatives.

With that there’s now also an example of using boot with generate_docs. It’s pretty straightforward still, just add codox in your build.boot, and update the DOC_CMD and WORK_TREE variables in the script like so

As part of adding the script to Derivatives Martin and I made several improvements, the current version is now here

I’ve turned it into a Gist so I can push updates if needed. In the long run we’ll need a better way to distribute this so people can more easily upgrade. Maybe it should actually be a lein/boot package? Or something something npm?

Of course even better would be a public service that can generate and host these docs for multiple libraries across multiple versions, but I personally have enough going on right now to start on that

So here are the brand-new derivatives docs. It’s interesting to see this come together in this form. Makes it quite a bit easier to see where documentation could be improved.

Of course even better would be a public service that can generate and host these docs for multiple libraries across multiple versions, but I personally have enough going on right now to start on that

I think that’s a very cool idea. I also have a bunch of other things in my queue but I believe that this could become a thing. I’m sure if such project came to be hosting would be a solvable issue as well. So many cool things to do…

I just keep seeing more uses for this, like I want to have some org-mode files, and always have the latest HTML version on-line as well. So far I’ve been copying this script from repo to repo, but it keeps improving, so I finally gave it a proper home. I tweaked it a bit more, and now it’s called autodoc (monospace font for the name is part of the branding :-P) 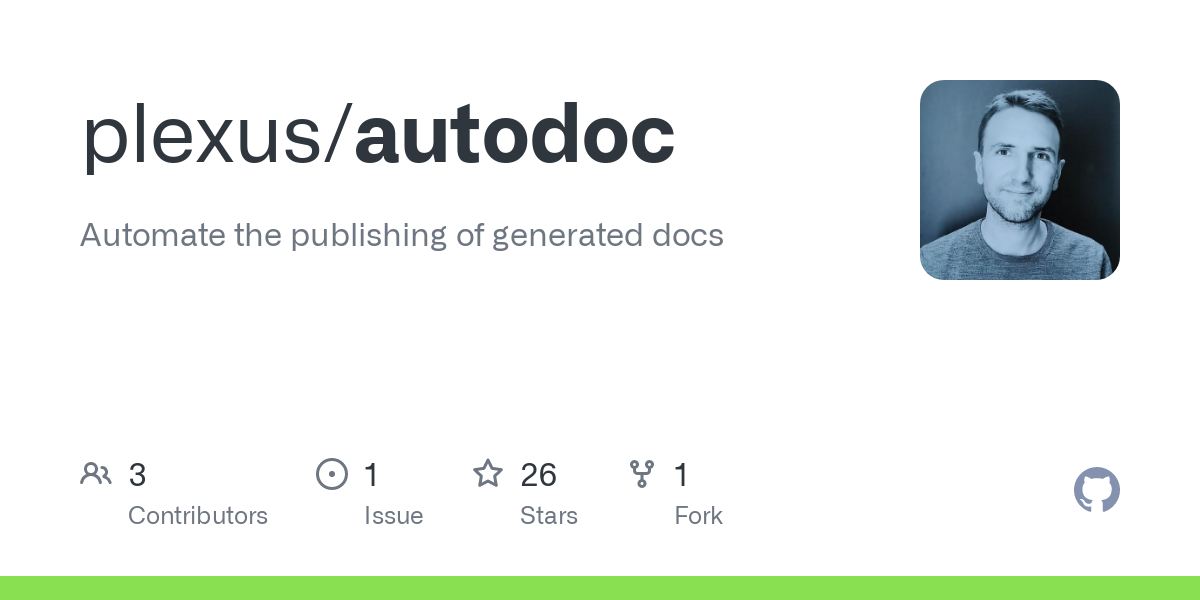 Automate the publishing of generated docs. Contribute to plexus/autodoc development by creating an account on GitHub.

With this you can simply put this in your repo

And… now it’s self-hosted. Converted the README to org-mode so I can convert it to HTML with emacs.

Also made the output a bit nicer, added a version number and CHANGELOG, added some more checks so that if warns you if something seems out of whack, like the DOC command not creating any output.