[WIP] A visual blocks engine for Clojure -- need your input!

Inspired by Parinfer and Paredit: embrace or avoid?, I whipped up a really basic frame-based code viewer for Clojure/ClojureScript.

You can see it live at http://lincoln-b.com/blocks.

All it does right now is turn code into a basic box representation like this:

Obviously, quite a bit of information is lost, and that’s where I need some help. What do you think is the best way to represent semantic blocks of code using colored boxes without losing any data?

Currently regular forms are blue, vectors are red, maps are green, and everything else is black. I’ve toyed with different border decorations (dotted, squiggly, double), as well as box-shadows and labels, although including the labels sort of defeats the purpose.

Since I can only put two links in a post, I couldn’t include the GitHub repo, but here it is: https://github.com/lincoln-b/blocks

Nice start! Take a look at Shaun Lebron’s Inspiring a future Clojure editor with forgotten Lisp UX if you haven’t seen it already:

It has some ideas about ways to maintain semantics without using colour alone and losing the brackets – the “filling” approach is one way: 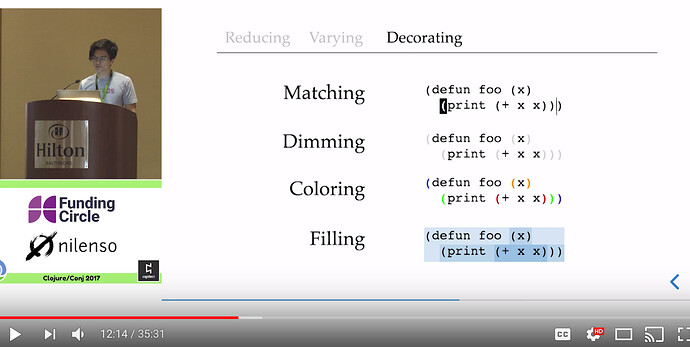 Glad someone started prototyping something already! I think you found the boundaries of the problem here pretty quickly. Here’s a full screenshot overview of your prototype for reference: 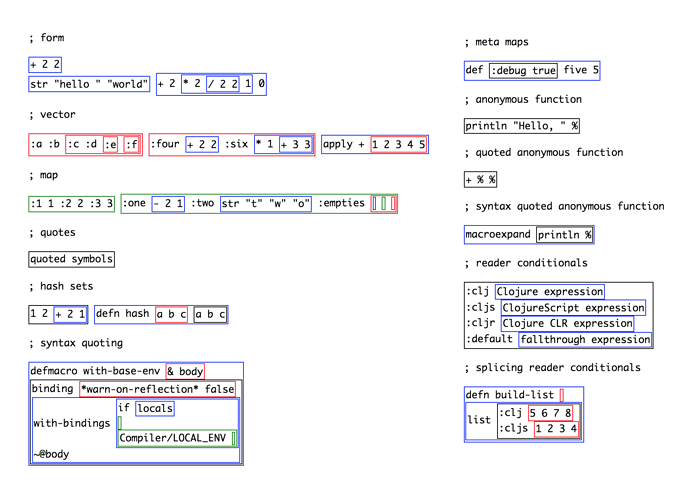 I think your question on what to do next is hard to answer, but maybe some context on what we’re dealing with exactly will help.

A frame is obviously associated with delimiters. So if we look, Clojure(script) has three types of them—but each with their own set of possible prefixes:

Further still, most can also be prefixed with quoting characters too:

(And I only include the following for completeness, should we want frames for strings or unreadables that can still be printed)

Part of the difficulty here is that Clojure syntax may continue growing, since it is a superset of edn afterall (e for extensible), particularly for tagged literals like #js, #queue, #inst, #uuid.

If we construct frames from what we know in the previous section, it seems feasible to start by determining a style for the three main delimiters—as you have done. Then to deal with all the prefixes, maybe insert them as labels, at least at first.

I think that reduces the problem of constructing frames to choosing styles for each:

Some sketches using corners and labels, but not colors: 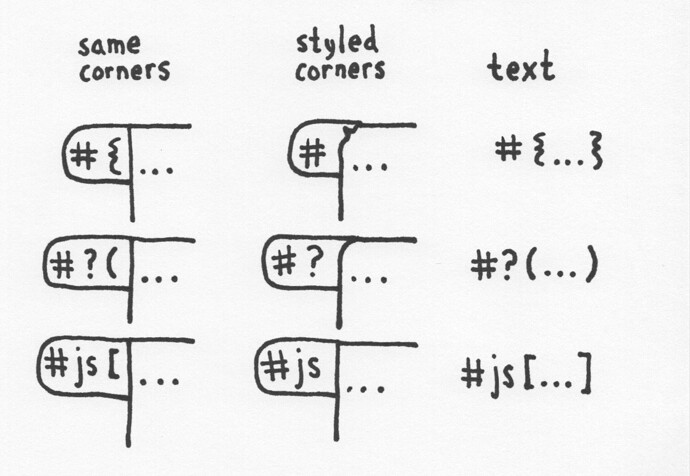 how to style nested borders

Showing code in Frames makes code more visual, but tracing lines to connect parentheses into boxes might be more overwhelming than the parens themselves—if done without some attention to aesthetic, I mean.

Some examples below to make this concrete.

There’s a lot that we can borrow from to build a Frame-based Clojure editor. Greenfoot is a good start, but there’s some extra problems to solve that are Clojure-specific—and some people have already started laying ground work here.

I haven’t been able to read through this recent journal yet, but that might help here too.

To answer your actual question, maybe using the “prefix bubbles” on the frame would be a good next thing to try.

I made Cirru Editor. Time for shout out my video again

There are also some screenshots of old explorations of Cirru Project, despite that it’s written in Chinese: https://segmentfault.com/a/1190000009737250

I hadn’t seen that @nick, thanks for the link. Lotta good stuff in there, leans toward the practical side too.

Looks like I got all those delimiter types except queues, (alias) namespace maps, and JS stuff. Here’s my list:

I got that from https://clojure.org/reference/reader, but I purposely ignored namespace map syntax because I don’t understand it. Relatively new clojurist still.

I now realize that colors shouldn’t be used to distinguish between block types – it’s too imprecise. Color is better for indentation a la LispWorks or Greenfoot. Frame corner styling is a good idea but I worry that it might be too subtle.

I like the prefix bubble idea. I was toying with labels above the boxes but they made the things a bit too unwieldy.

And I like @jiyinyiyong’s use of the frame cursor and border displays, that seems like a good way to do it.

Speaking to the earlier point of distinguishing the three main frame types, I suppose you could use left-right borders for forms, bottom borders for vectors, and maybe top-bottom dotted borders for maps. That would make the meaning more immediately transparent AND remove visual noise. Huh.

Thanks for your feedback, that’s by far the most useful input I’ve gotten so far. I didn’t realize so much work had already been done in this area.

I like the idea.
The green box for maps is a bit difficult to differentiate when they’re boxed inside a list which is blue
When the two lines are close together it is really hard to distinguish

I’ve pasted in some pretty hairy code and came to a realization that this is a great tool for getting a handle on a new codebase or revisiting a codebase you haven’t touched in a while.

It really lets you get a birds eyeview of how the code is structured.

I’m interested to see a discussion about what would be more helpful; a standard scheme or scheme customization
Standard scheme advantage is that after a while you can quickly scan some code and quickly understand the structure, the types being used, and scopes.

Scheme Customization, or rather, not having a set in stone way of colorizing data structures means that if you get sick of the color scheme you can just change it without having to create an RFC and bump the version. But if you have to learn a new color scheme over and over again, you lose the speed of understanding.

I’m very excited about this.

Color is a tricky visual dimension — in most situations it’s easier for people to quickly interpret relationships encoded in distance and proximity.

Cynthia Brewer’s research is particularly accessible in an online color picker that helps you choose colors with respect to the data you are trying to communicate:

I’ve recently been experimenting with Spec for building UIs. The idea is to recurse though your data structure and its Spec, using the spec to inform the UI where possible (and if not, use type). You don’t always need a full spec, you can use (s/* any?) or something for unspec’d structure, but there you do have a spec it helps. For example, if you have a map representing a distribution {:mu 0.5 :sigma 0.1} you could render that as 2 sliders. But if you have the Spec for it, you could render it as an SVG graphic with controls to directly manipulate the distribution.
You can also do a kind of visual ellipsis where your spec says a data structure is a repeated pattern (to outline what the rest of the data would look like) – I mean, as you can imagine there are loads of possibilities.
The code I’ve written is hideous so I don’t want to release it yet, but it’s enough to know it can be done.

More thoughts: I’ve recently read Where Mathematics Comes From (Lakoff & Nuñez) and it struck me that Clojure code perfectly embodies two of the fundamental metaphors described: the container metaphor (as (in (like this))) and the trajectory metaphor, (-> as in like this)!
Readers of this book will realize all kinds of possibilities for the display of code.

I’ve been thinking about a design most visually similar to Matthew Chadwick’s, leveraging transparency and nesting, and the idea of the current screen being represented by a “context” node in the AST, and visualizes navigation up and down the context tree with zooming. Also a small + (conj) button at the bottom of the currently-focused node.

I think the most important part of any Clojure editor is that it offer low-friction self-modification (Emacs). This allows for quick visual prototyping in the course of regular programming, the same way that a hackable text editor allows encourages the accumulation of invisible customizations. Once that starts to get steam, the textual syntax underneath will disappear as far as many are concerned and many forms of programming will go fully-visual fairly quickly.

I’ve also been working on a generic interpreter for exactly such an editor (warning, shameless plug): https://github.com/notduncansmith/factfold

Basically, it’s a way to sneak Lisp onto other platforms, by structuring code in such a way as to get most of the correctness and succinctness of Clojure from other programming environments. An editor for this structure works near-identically as a specialized Clojure editor, but can have just about any language at the bottom, as the interpreter is straightforward to port to most platforms.

EDIT: Also in the vein of reading recommendations, I wanted to mention the fantastic “Notation as a Tool of Thought” paper by Ken Iverson.

Great ideas! Would love to see a better alternative to rainbow parens (colourblind

Here’s some more inspiration. It’s Shbobo’s Fish, a drag and drop sexp editor for Shlisp (a DSL for computer music). 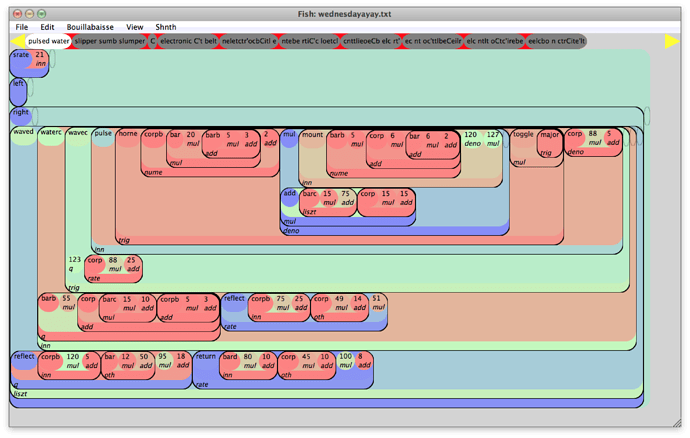 Just wanted to add some comments to the Plastic screenshot: 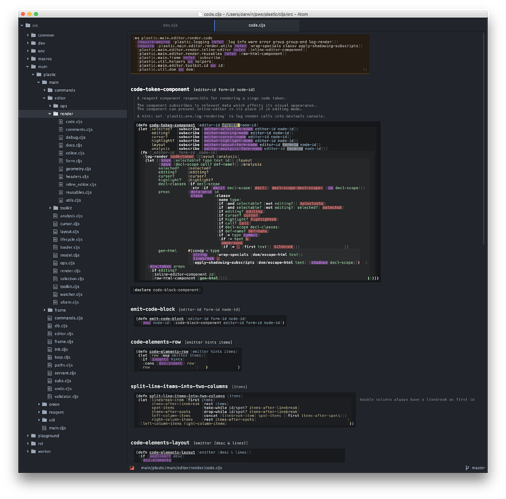 I explored some other things like having visible frames at each level, but it looked too “busy” for real-world code: 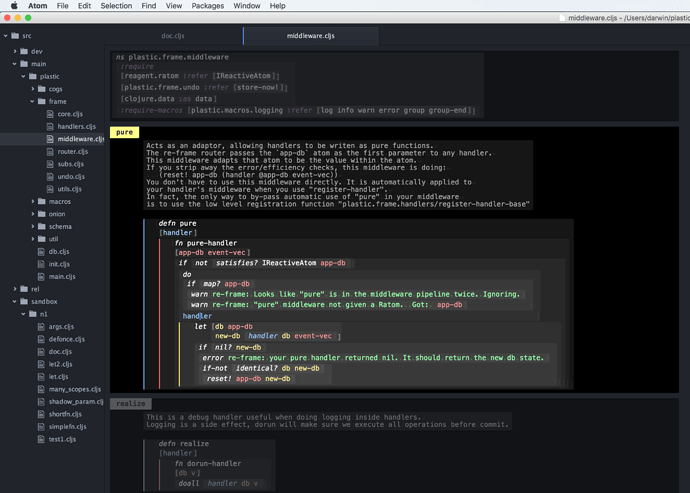 I would really like to see more and weirder variations on programming notation. Sadly, I’m as hemmed into text-y presentations as everyone else, having started with Lisp on dumb terminals in the 80s.

One idea I’ve been meaning to chase for awhile is the introduction of nested style sheets defined as metadata on each macro/function. The idea here is that not all forms want the same formatting, so it should be possible to hint the editor that cond, for example, wants a vertically positioned series of pairs. If the presentation metadata were combined with something like spec, the editor could also provide constraints/hints on legal input as well.

Lots of interesting ideas and research here, I thought I would add some mention of blocks as visual aids to understanding and experiencing live code.

Dave Griffith’s did some work on the use of visual scheme closure blocks to visualise the live building and running of a musical performance. Pulsing with beats, clock pulses and activity. The project Scheme Bricks:

Once you have the visual tools in place to aid development, new ways of communicating the liveliness of a system become possible…

Scheme blocks are one of my favorites from an aesthetic perspective.